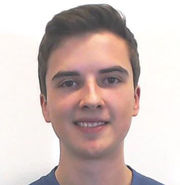 I am 23 years old, born in Austria, Carinthia, and at the time I am living in Salzburg where I am pursuing my Master's degree in MMT at the University of Applied Sciences Salzburg. During my studies I was asked to hold the tutorials for the lectures "Applied Mathematics 1", "Introduction to Programming" and "Introduction to Computergraphics". I was also able to participate in internships at Dynatrace and Redox where I gathered a lot of experience both in professional software- and game-development.
At Dynatrace I mainly worked on ILVerify, an open-source tool by Microsoft and at Redox I developed a published mobile game using Unity and C#. After my internship Redox decided to hire me as a part time employee, alongside my studies for 6 months.

In my high-school years my interest in computer sciences also lead me to two internships at the University of Klagenfurt. During my first internship I worked in a team of 3 on programming a small Lego-NXT robot to be controlled with hand gestures using Microsoft's Kinect using C#. My second internship was about programming an AR Parrot drone to recognize a specific pattern with its onboard camera and to follow that pattern. In a team of 4 people we programmed a simple user interface in Java which also visualised the analytical processes of the drone.

After graduating from grammar school I served my civilian service at the Austrian Red Cross for 9 months.